EHRI collection description: Card index of the "general documents" of the collection Incarceration and Persecution


Numbering System
The concentration camp Auschwitz was opened in 1940. The first inmates were Germans BV (Berufsverbrecher), men only, and their numbers went from 1. to 30.
In May 1940 the first transport of men arrived from KIELCE (Poland). Then the 30 Germans became Kapos or Block-leaders.
All men arrived in the camp until January 1945 received numbers going from 1 to 200.000.
In autumn 1941 another camp (situated 3 km from Auschwitz) was opened for women, prisoners of war and gypsies. Its name was RAJSKO=BIRKENAU=BRZEZINKI. Five crematories were erected.
Women numbers reached 100.000.
Gypsies had special numbers going approximately from 1 to 30.000 (gypsies were considered as asocial, Aso), and wore black triangles.
In 1941 12.600 Russian prisoners of war arrived in the camp and were put in a separate camp. Their numbers went from 1 to 12.600. Out of this number only 60 survived, the remainder having been gassed. The 60 survivors were mixed up with Schutzhäftlinge (SchH) in RAJSKO.
In 1941 the Erziehungshäftlinge (ErzH) had numbers going from 1 to 3.000.

SERIAL A. Hungarian Jews. Men. from 1 to 29.000 (in 1944). 28.000 of them were gassed in spite of the fact that they had been promised to be exchanged against German prisoners.
Women. They were also given special numbers from 1 to ?
Hungarian Gypsies. In summer 1944 quite a number of Gypsies arrived in Auschwitz. They were all gassed without being registered.
(As a rule all people who were gassed were not registered).

SERIAL B. French and Belgian Jews. Up to the end of 1944 their numbers went from 1 to 15.000.
On 20.10.1944 all Poles were forbidden to go outside the gate of their camp (For this reason Mr. Zaremba cannot give further details on the numbering system in the following months).
The Poles were sent to RAJSKO and from there to Germany.
One group left by train in a small cattle truck. The number of prisoners squeezed in this truck was 120, with S.S. in every corner shooting across into the crowd. 26 died. (January 1945)
A second group left on foot (Death march Auschwitz-Gross Rosen)
In February 1945 a third group left for Hersbruck (Aussenkommando Flossenburg near Nürnberg). After an air raid on Nürnberg they had to lear away the debris in the Nürnberg station.
On 8.4.1945 there was another death march on foot, Hersbruck-Dachau. They arrived in Dachau on 22.4.1945. On the approaching of the American Army began the evacuation of Jews, Russians and Germans. This resulted in another death march, Dachau-Bad Tölz (Tyrol).

N.B. The tattooing was on the forearm outside or on the upper arm inside. 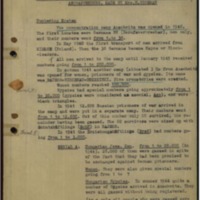