PIZ Record of Witness Testimony 491, given by a Jewish survivor to Luba Melchior.

PIZ Record of Witness Testimony 491, given by a Jewish survivor to Luba Melchior.

Here stands Ms
in Będzin
religion
parents’ forenames
proof of identity provided
last place of residence in Poland current place of residence
5 April 1915 seamstress
Polish
Helena Szykman
born on , occupation
, nationality
Będzin leaving for Poland
Jewish
Jozef and Roza
[not completed]
who – having been cautioned as to the importance of truthful testimony as well as to the responsibility for, and consequences of, false testimony – hereby declares as follows:
I was arrested in [not completed] on [not completed]
I was held in prison (ghetto, labour camp, etc.): in Będzin
until August 1943.
I was interned at the concentration camp in Auschwitz
from August 1943 to 1 November 1944 as a political prisoner
bearing the number 51810 (tattoo with triangle) and wearing a [not completed] -coloured triangle with the letter [not completed]
I was later interned in Ravensbrück
from 1 November 1944
and then I was interned at Malchow
from late November 1944 to 24 April 1945.
to 22 November 1944; Hela Szykman
Asked whether, with regard to my internment in the prison, ghetto, or concentration camp, I possess any particular knowledge about how the camp was organized, how prisoners were treated, their living and working conditions, medical and pastoral care, the hygienic conditions in the camp, or any particular events concerning any aspect of camp life, I state as follows:
The testimony is composed of three and a half pages of handwriting and describes the following:
Auschwitz
Induction, quarantine, camp conditions, treatment of prisoners, health, work, selections, Revier [infirmary, Ger.], transports diverted directly to the crematorium, working conditions, death rate, punishments, transport
Ravensbrück
Zelt [tent, Ger.], bathhouse, conditions in the block, transport
Malchow
Hunger, accommodation conditions, work
BLOM’S PRINTING, LUND 1946
Testimony of Ms Helena Szykman, born on 5 April 1915
The last place I was staying in Będzin was the ghetto. There were frequent round-ups and transports. I
was transported in August 1943; we were sent to Auschwitz. We travelled together in freight wagons: men, women, and children. It was very cramped; we lay on the floor like cattle.
We arrived in Auschwitz at 10 p.m. My child was taken from me at the railway station. A selection took place there. Not many people made it to the camp. I arrived with two sisters. We spent all night sitting in the zauna [bathhouse, from Ger. Sauna]. They cut off our hair and gave us clothing – dresses in which we looked like madwomen. I couldn’t recognize my sisters after leaving the bathhouse. We were tattooed early in the morning. Numbers were sewn onto our dresses. We stood in the camp street until eleven o’clock. At 5 p.m. we were led to our block. They didn’t give us any food until two days later: half a litre of soup without any bread. The following day – that is, after the third after the third day after arrival – we received our first portion of bread, but no soup. I stayed in that block for two months. We underwent quarantine there. We went outside only for Appells [roll call assemblies, Ger.]: at 5 a.m. and 6 p.m. Apart from this, we were not permitted to leave the block. We were taken to the toilets in groups. We were not allowed out to the Waschraum [washing room, Ger.] in order to wash ourselves. There was no water. The standard ration was half a litre of soup and 200 grams of bread. We were beaten into a stupor. The prisoner functionaries were brutal towards us. While still in quarantine, there appeared among us cases of a terrible camp affliction – Durchfall [diarrhoea, Ger.]. Once quarantine was over, we moved to a different block and began going to work. I worked aussen [outside (the camp), Ger.]. We dug ditches, carried stones. The work was hard. The Postens [(male) guards, Ger.] and German aufseherkas [female guards, from Ger. Aufseherin] beat us severely. There were often corpses at work. We worked from one Appell to the next. The lunch break lasted only ten to twenty minutes. My sisters and I worked together, but not for long. There were selections. In December 1943, some women were selected; they were said to be going to the bathhouse. It turned out they went to the gas chamber. Among the selectees was one of my sisters. A month later, my other sister was taken from me during another such selection. Everyone had to go to work. Whenever anyone

complained, they would be sent to the Revier. The Revier was frequently purged by Tauber; that is, he took people away for gassing. Many were sick with Typhus. Many were dying. Also taken to the gas chamber were women who had scabies. And scabies was rife because conditions were filthy and there was no medical treatment. In 1944, there were many transports which were never let into the camp; entire transports went straight to the crematorium. Transports were coming non-stop. In fact, we had to take a different way to work, because our previous route crossed the train tracks, which now were always jammed with railway wagons and people. The transports were coming from all over Europe. The crematorium ovens burned non-stop.
We were escorted to work by Postens with dogs. They used to set the dogs on us. The dogs would often bite and tear out chunks of flesh. We went to work without [proper] clothing. We would work in the coldest frosts and heaviest rain, mostly without stockings. And the wooden clogs made walking impossible.
At work, we were not permitted to relieve our physiological needs. When we did so nevertheless, the aufseherkas would beat us till we bled. The journey to work and the work itself took place on very clayey ground. Our feet would sink into it; it was slippery, so we fell. And we would be beaten mercilessly. It was impossible to walk quickly or work quickly – which is why we were beaten. There were many deaths. As a result of beating, women’s health would collapse and they would die. Every few months, our hair would be shorn off; it wasn’t given the chance to grow back out. And in the wintertime it quite often happened, despite our shaved heads we were not allowed to wear headscarves. Auschwitz was hell; it was indescribable. Conditions in the blocks were unbearable: ten people to a bunk; no heating in the blocks during winter. We would often come back in wet clothes after spending all day in the rain, yet there was nowhere for us to dry them. The next day, we would have to put our wet dresses back on. The Appells were exhausting. We weren’t allowed to talk to one another. When one woman spoke to another, the blokowa [chief prisoner of the block, from Ger. Blockälteste] noticed and punished the entire block. We spent hours kneeling after a hard day’s work, tired, hungry, and often

wearing wet dresses. And we knelt on sand; our knees would get cut up.
I was at Auschwitz until 1 November 1944. We were taken to the zauna where another selection took
place. Whoever looked well and had a clean body was sent away for transport; the rest were selected. We were made to change clothes and given food for the journey: bread, sausage, and three portions of margarine. We were held in the bathhouse the entire night. The following day, we were put into freight wagons. We travelled for three days; throughout this time, we were not given any food or water. We were not permitted to leave. We were given a single bucket for the relief of our physiological needs. Many people were suffering from Durchfall, so it was not long before the bucket was full, but there was no way to empty it. It was overflowing. The wagon was filthy and foul-smelling inside. We arrived at Ravensbrück in the night-time. We imagined that we were going to be executed. Waiting for us at Ravensbrück railway station were Postens and aufseherkas. We were arranged into ranks of five before marching off to the camp. At Ravensbrück, we were kept in a Zelt for three days. No water was provided. We drank water out of a gutter. From the Zelt, they took us to the Bad [bathhouse, Ger.] and had us bathe; then we went to the block. There, we were assigned two to a bed. The beds were stacked three high. It was very cramped. And starvation was rife. The Appells exhausted us; they lasted even longer than they had at Auschwitz. After two weeks, we were taken into the main street of the camp. A German civilian looked us over and took his pick. The selectees were later examined and given numbers; then, a week later, they were taken to the bathhouse. We were made to bathe and change clothes. The bathing process took all night; at dawn, we were taken to the block. We were kept in the camp street all day long; it wasn’t until just before evening that we set out. We spent a day and a night in transit, arriving in Malchow at 1 a.m. [illegible crossing- out]
The camp in Malchow was empty. We were quartered in barrack-style buildings. The accommodation conditions were not bad, but we were starving. At first, things were a bit better; later, our hunger grew worse and worse. After a few days, we began work at a factory. 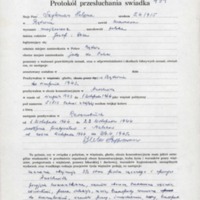 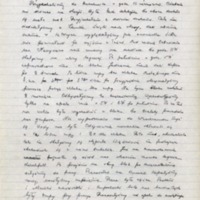 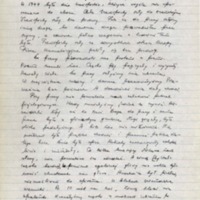 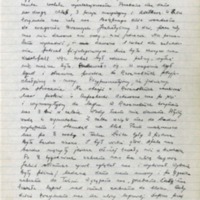 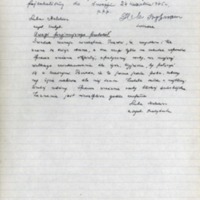